I’m going to assume that the world outside of the True North is completely unaware of the fact that Canada has been living without its most cherished thing in the whole wide world right now. That is, we are presently without the NHL, or to the uninitiated, the National Hockey League, and to the severely uninitiated what that means is no hockey. In Canada. No hockey in Canada.

Perspective: No morning sex; no shopping for shoes; no gaming with friends; no milk with your cookies; no salt or pepper; no shots with beer; no mustard with your hotdog; no hotdogs; no baseball in the summer; no anything good, etc. and so forth.

I’m fully aware that this list is completely 1st world savvy and does not reflect the whole of a glass being half full. Nor is it particular in what makes one happy. Just know that in Canada, this is one massively disappointing start to a period of our yearly calendar where we are reminded why it’s awesome to be Canadian. And without the comfort of hockey for us to rally around, supply us with the default plan on a Saturday night, and bolster all the business and industry that benefits from the passion of our most beloved sport, and that fcuking apocalyptic Mayan calendar thing might as well be real. This sucks.

The comparison is a little too scary…

I guess the next stage of this blog is the question of why? Why no hockey? Ya’see there is a labour dispute and it’s all about money. The really, really, really stupid thing is, they already had a lock out in 2004, lost the entire season, and alienated fans to the point where attendance was down considerably the next year. Except in Toronto. In this city, we love our Maple Leafs so unconditionally that we’d pay $300 front row bathroom stall just to watch them take a shit. The Leafs haven’t done anything significant in what feels like a century, and yet the Air Canada Centre, the arena in which the Leafs play, is always sold out, crappy season or not.

Now, overall, it is my understanding that most geeks don’t enjoy sports unless it involves a TV screen and a whole lotta button mashing. So be it. At this point, that would be your loss, and the whole geek vs. sport thing deserves another look see anyway, but at a later date*.  No, all that matters to us right now is getting hockey back before the skillionaires allow history to repeat itself and condemn us to another 5 months of winter without hockey – at least the really awesome elite professional kind. 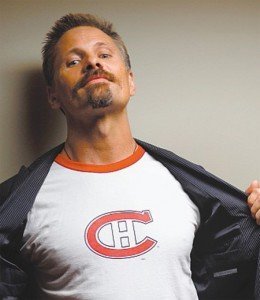 Wielder of Anduril my ass.

Luckily, even though there is no Hockey Night in Canada, there is Gaming Night in Canada to help ease the pain – you’re welcome – and our thoughts take us to sports games in general…the table top, dice rolling kind.  If you have beer, please crack one open now.

Somewhere around 1984 the burgeoning members of Fiery Dragon and our friends, joined the high school “Games Club”. Maybe the significance of such a club would not be important now-a-days; I don’t know,  I imagine that there are still other related clubs that one can be a part of…like a chess club?  Really, the need seems redundant given what on-line gaming does for ya. Yet another thing up for further discussion**.

Ahhhh, Games Club. Close to how I remember it…

Our games club that first year offered the games that were in vogue at the time – everything from D&D to Civilization to Gammarauders. However, there was a faction of the club that was really into something called Strat-o-Matic Baseball. Later, we would just refer to it as “Strat”, but it was the first example I was aware of where there was an attempt to take the mechanics and physicality of a sport and simulate it through dice rolls and player statistics.

The true Mother of all Battles

There’s something about baseball, its structure, its pace, its love to track and quantify performance in every aspect, that’s so adaptable to other gaming platforms; whether on a pool table, or a pinball machine, digital games, video games, board games, or table-top dice games like Strat.

As an aside, Baseball is a hell of a sport. I love it. It’s on par with hockey in my book and like my Dad, you won’t find a bigger Blue Jay fan around since they came to town in ’77. Needless to say, back to back World Series in ’92/’93 – super exciting, and all my favourite sports figures are not hockey players; a list that would include Tom “The Terminator” Henke, Tony Fernandez, Jesse Barfield, Ryne Sandberg and Tony Gwynn…before I’d start gushing about Grant Fuher, Wayne Gretzky, Wendell Clark and Mark Messier…

…The next year of games club was when the Strat addiction started for everyone. The basics of Strat is a lot like D&D.  Characters are assembled in a marching order and dice are rolled against their statistics to determine an outcome within the parameters of the game’s set rules. But with Strat, instead of a wizard casting a lightning bolt spell to strike down a despicably evil jackass sacrificing a maiden, you had Jesse Barfield throwing one of his lightning bolts to gun down Rickey Henderson at home plate. You see, it’s all relative.

Meanwhile, back at the games club, it was one of those perfect storms that everyone talks about. Young, competitive minds looking for the immediacy of head-to-head fcuk you trash talking over the simulated statistics of Baseball.  Factor in a young Toronto Blue Jays organization winning the American League in’85 and then continuing to kick-ass for the next 8 years and we were hooked. It was still Games Club, but Strat was the game…

Strat-o-Matic is licensed with real Major League teams, consisting of real Major League Players. A player’s performance for that year is calculated out, against right and left handed players, into Strat’s unique system of probabilities. Pitcher and hitter are paired up and dice are rolled against those probabilities producing an outcome.

Then, the full on trolling starts and the competition is at hand.  The running game, defensive stances, playing for the 3 run homer – all of baseball’s situations and strategies are represented and employed. It’s about as close to managing a real baseball team as it gets – as long as you have a sizeable group of likeminded players to do it with. Drafts, trades, seasons, playoffs, and World Series -we did it all.

TSR knew this would happen.

And the simulation translates well in its gameplay. Pretty close. However, IT IS a simulation and IT IS just a reflection of performance, so every now and then some batshit crazy will happen.  “The Wizard”‘, Ozzie Smith was on my team, a team which I took to the World Series. First game Ozzie hit for the “Cycle” (single, double, triple, and home run), the home run being a Grand Slam, AND he stole home base. Broken, but still glorious. However, this was very rare and let’s face it, it was the dice’s fault. But also, Ozzie was that good.

Thanks for another Wizard reference OZ…zie.

In time Strat steered us into asking a very simple question, “What else can we roll dice too?” Strat-o-matic the company attempted every other sport available – football, basketball, and hockey…but our attempts to try them was foiled…Avalon Hill Games had put out a Statis-Pro series that covered everything, and I mean everything, but hockey. Regardless, we had acquired their baseball and football versions. The baseball was ok, but the football was actually very intriguing. It helped, I imagine, that the season we tried was the year of the ’85 Chicago Bears. Still, not enough to sway us from Strat.  And then there was another baseball card game called Pursue the Pennant.  It was very slick and comparable to Strat in many, many ways – lots of bells and whistles too.  It had this thing where you could convert its box into any one of the Major League ball parks. A fun gimmick, but really, that’s all that it was.  Strat’s ability to be played as easily as a game of dominos was part of the game’s appeal.  ‘Cause, we’d play that game in a closet if needed.

And then, out of nowhere we discovered something that could give Strat a run for its money: National Pro Hockey.

A hockey dice and card game no less, it came out in ’85 and it was a lot of fun.  I guess what really impressed us was that hockey is a fast paced free flowing aggressive sport that has stops and starts, penalties, and line changes – and yet somewhere in all the dice rolling it accounts for it all.  Each player has its own card, and tracks his play in each of the 3 zones of hockey; defensive, neutral, and offensive.  By segmenting the hockey rink in this fashion it “slows” the action down enough so the game mechanics can take over and let the simulation take shape.  Traditional hockey strategies matter and do affect outcomes.  The only criticism I had was that scores had a tendency to be a little high, that is, there seemed to be a lot of goals going back and forth.  But then, it’s the 1984/85 season which contained a lot of great players – from a young rookie named Mario Lemieux to Wayne Gretzky in his prime – goals were pretty abundant.  Fantastic game considering all the expectations it needed to satisfy, however it skated off into obscurity despite the fact that none of it ever went on strike. Shame.

Actually, its more of a lock-out than a strike.

High school ended but the desire to play Strat-o-Matic Baseball carried on.  Mini-tournaments with a little cash prize continued into the 90’s, everyone from the old games club happy to see one another and catch up.  Eventually, even those tournaments became hard to organize and “regular” Strat play became a pleasant memory.  This won’t be the last time I mention that games club I’m sure, but I always thought it was a special thing that a good number of its members still made the time to get together after the fact…just to cram another loss down some sucker’s throat one more time.

Methinks that this would be the part where I would say something on how today’s video games eclipse whatever dice games were ever available, and I guess they would be right.  I mean, yes, there would be a lot of truth to that.  Our love of Strat tournaments would later give way to PlayStation FIFA tournaments, and they would get just as heated.  And yes, in all these games they give you the option to play and manage your team, and that’s great, but there’s still something about Strat-o-Matic.  The game is more organic, and you’re generating the result, not the system’s A.I., and hand-eye coordination doesn’t even enter into it.  You could completely eliminate game play and just manage by joining a fantasy league, but that’s based on real time performance.  Strat-o-Matic relives the performance, with the premise of what may had been, rather than what is.

A couple of years ago, for a birthday, The Crew gifted me a recent set of Strat-o-Matic.  I had a smile on my face about it for days. I started writing this entry because of my frustration with the hockey strike and then, all of sudden, my beloved Blue Jays decided to get back to their old school ways and pull off a one hell of a trade.  A few days later they sign a quality outfielder and now we’re talking serious contention***.  Finally, miraculously, THANKFULLY, baseball is back in town if at least hockey isn’t, and maybe, just maybe, it’s time to break out that new set of Strat-o-Matic my friends so generously thought of…and whoop their asses at it.

***Check the news sports fans…the Jays are back! ed.