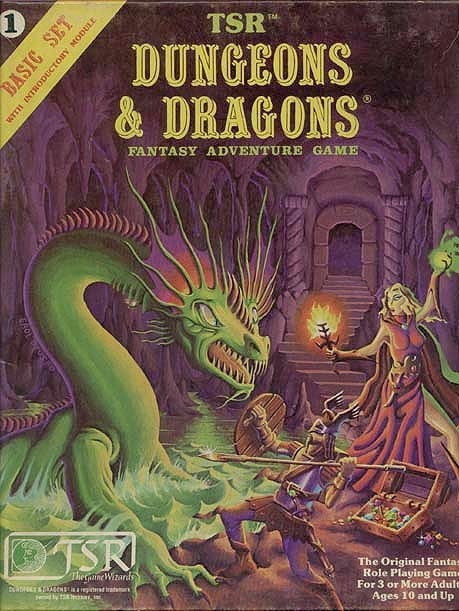 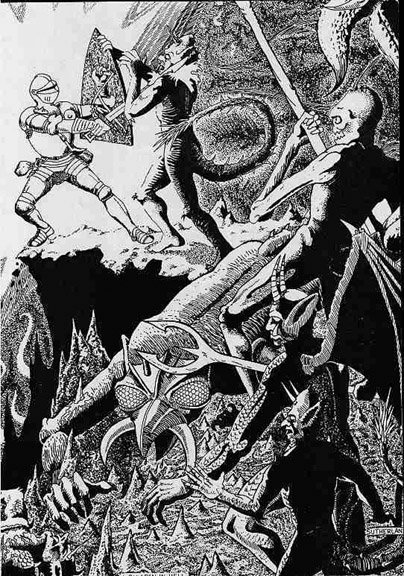 Of all the monsters and illustrations in the original Monster Manual, it is Trampier’s Intellect Devourer that is by far the creepiest. So strong is this image, that there has yet to be a rendition of this monster since that even comes close to the strength of its original drawing. 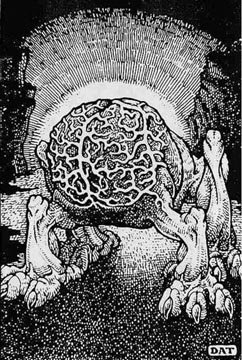 Found in the 1st edition Rogues Gallery, Jeff Dee’s “Paladin,” like Sutherland’s offering, does a tremendous job of capturing the essence of honor and adventure that can be found in the world of D&D. Proud and victorious, our hero casts his gaze skyward in recognition of his lawful god — the defeated dragon of chaos (a Black Dragon, to be exact) serves as proof of his devotion and bravery. Too cool for school. 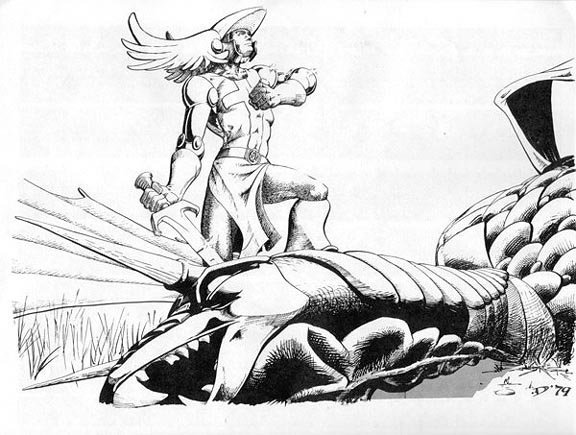 The painting that launched a franchise, Caldwell’s cover to the first adventure of the Dragonlance Saga had signaled a new shift in TSR’s design. Love or hate Dragonlance, the cover was a refreshing change compared to the many other offerings at that point. As much as the cover art of Erol Otus, Jeff Dee, Roslof, Bill Willingham, and others was great, no one was as true a painter as Caldwell. While the others were almost “comic-booky” in their approach, it was Caldwell who ushered in the look that one expects to see today. I remember when I saw it on the shelf for the first time and being absolutely blown away by its beauty. 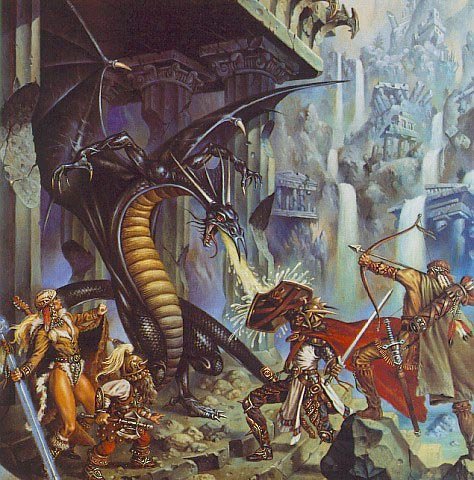 Actually entitled “Horseman Near Lake,” there is a powerfully exotic yet subtle feel to this Parkinson painting that truly sets itself apart. Its impact was so great in fact, that one must consider that this image was ushering in a first time rival to the very popular World of Greyhawk, but was devoid of any dragons, action, or sex. Just like Caldwell’s Dragonlance painting, “Horseman Near Lake” began yet another exciting shift in the game and the Forgotten Realms was suddenly something that every DM and player wanted to explore. 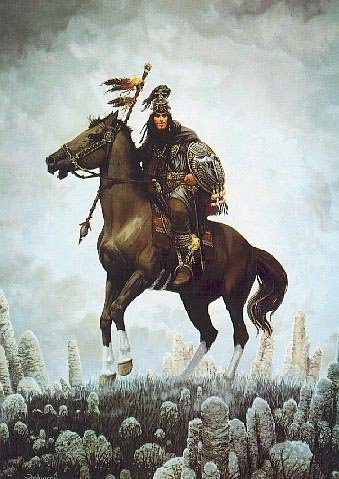 #4: D.A. Trampier’s Illustration #3
of the Tomb of Horrors

Regarded as one of the best adventures of all time, part of this acclaim has to come from the illustration booklet that accompanied the product. Considered extremely innovative at that point, the booklet depicted scenes and encounters found throughout the adventure and definitely enhanced the overall experience. Illustration #3 had an awe-inspiring effect on those who were entering the tomb for the first time given the adventure’s reputation — the feeling of dread and doom is immediately conveyed by the subject matter of the frescos, the winding tile path into the darkness, and the curious box to the right of the drawing that “pops” out once the picture is studied carefully. The tomb is known for its tricks and traps, and the hallway itself is arguably one of the most difficult to negotiate in adventuring history — in part to this amazing piece of art work. 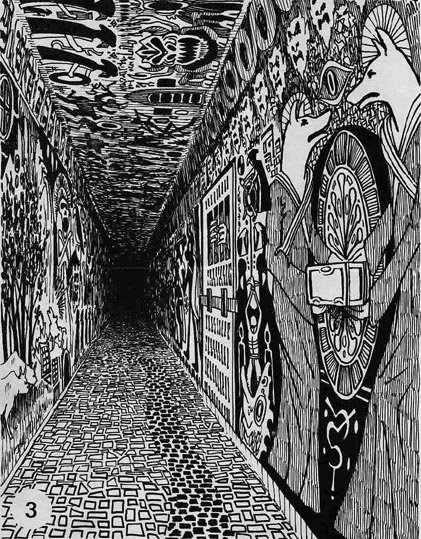 Needless to say, this list is dominated by D.A. Trampier — a testament to his skill and power as an illustrator. Trampier defined the early look of the game and inspired one’s imagination to the possibilities that the world of D&D had to offer. In the beginning, when you factor in the original core books, the first wave of adventures, and the early offerings of Dragon Magazine, Trampier was very prolific and very effective. His stuff on the “Wormy” comic strip alone was enough to make him near and dear to fans of the time. This particular piece, found in the Monster Manual, embodies one of the staples of adventuring: the discovery of the treasure hoard. Gathered around a chest of treasure in the darkness of some forgotten dungeon is a moment that has been played out time and time again by adventurers, and this particular illustration captured it beautifully. 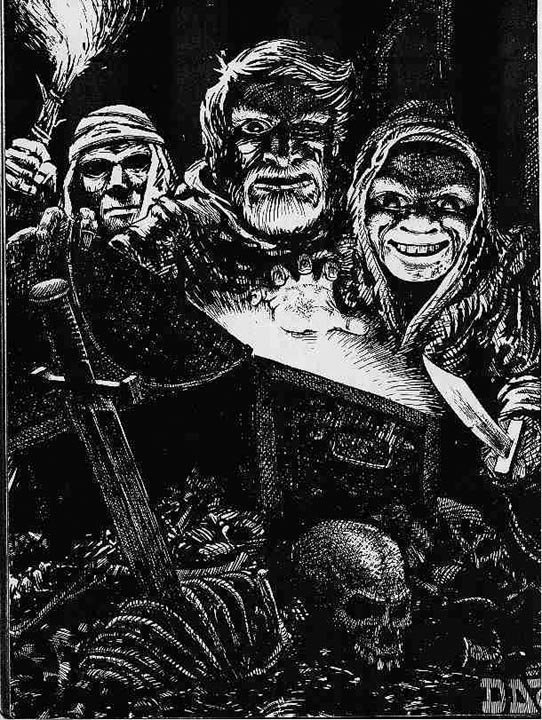 Truly, one of the classic illustrations of the time, “Emirikol the Chaotic” would likely be at the top of anyone’s list. From a technical standpoint, this drawing is fabulous, but really, like with most Trampier drawings, it is the implied story that really draws the viewer in. A late afternoon battle in the city streets between a known criminal wizard and city guardsmen? An assassination outside of the Green Griffon? Or a rampage of evil that threatens the city? Whatever the true story is, it is certainly a masterpiece of D&D illustration that one can find in the Dungeon Master’s Guide. 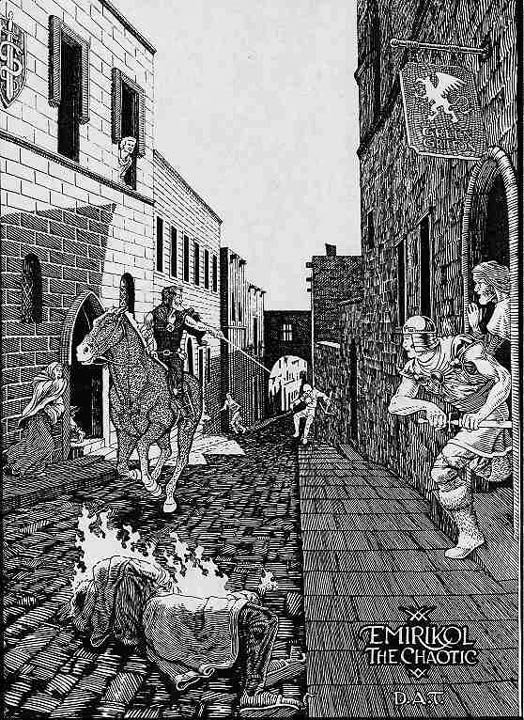 I think that it would be safe to assume that Emirikol could have just as easily filled the number one position, but there’s something about this illustration (found in the Player’s Handbook) that, in my opinion, out classes it. First off, there are effects that are taking place in it that are outstanding (the floor texture is amazingly handled, achieving a beautiful 3D quality). Secondly, and most importantly, this drawing sums up adventuring at its best: delving down in the darkness, the company encountering a magic mouth (one can only imagine what it is saying), and further down the stairs, the eyes of an awaiting denizen. Awesome. 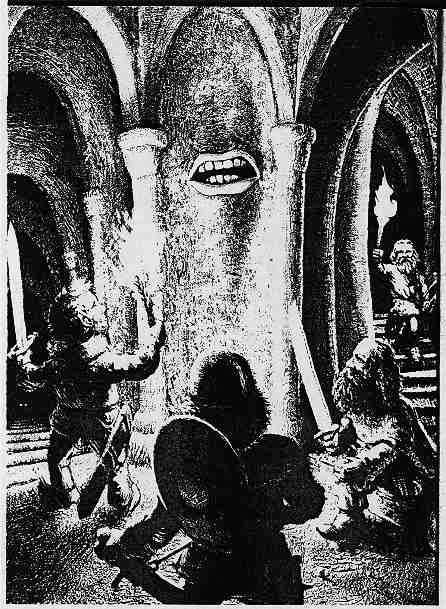