The Counter Culture 2009
Part 2: The Philosophy of Counters
By Todd Secord

Introduction
This is the second of 3 articles that delve into Fiery Dragon Production’s long line of Gaming Counter products. Part 1 “The Culture of Counters” talks of the company’s long standing history of producing counters for the gaming industry and many of the Frequently Asked Questions (FAQ) that we have encountered over the years. Part 2 talks of the Philosophy of counters; how counters can help to improve one’s game beyond their obvious use, and lastly, Part 3 “Counter Workshop” gets into the construction and care of counters. Let’s begin!

The Philosophy
The following is a “How To” on getting the most out of our counter products. Covered here is a best practice on the selection and use of the counters. Much of this comes from Fiery Dragon’s play testing and design intentions, but also from the feedback of 9 years of happy customers. Fiery Dragon offers two kinds of counter products at present; Published Counters and Digital Counters. Published counters are the “hardcopy” version of the counters that you could buy at your local gaming store (or order online). They come in sheets, on card stock, and are generally grouped in themes. The digital versions of the counters come in themed packages as well (or you can obtain all of the images with Counter Collection Digital v3.0), for which you can download or buy the applicable CD. They contain the images only, which can be organized and printed as needed, as much as you need.

Using the Counters to Generate Tension
One thing about the counters that we’ve kept constant is our labeling pratice. These counters are not labeled with the monster or character name, as many characters may encounter creatures for the first time and player knowledge of the adversary may provide an unfair advantage. The GM should use this mystery to her or her benefit. For example, instead of saying, “You encounter four bugbear warriors,” the GM might say, “You encounter four large humanoids, with monstrous features, growling as they spot you,” then place the appropriate counters on the battle grid for the players to see the picture.

Counters Are Your Friends
Having a graphic representation of a monster or character is a valuable shortcut, especially in games which involve a variety of combat tactics. Some people may get “stuck” on the counter image, thinking that a certain counter can’t be used because is shows the creature holding a short sword rather than the battle axe listed in the stat block. Don’t let minor details like this bog down the game! Counters are meant to serve as visual representations and shortcuts rather than “written-in-stone” definitions. The blue van can be used as a stand-in for the SWAT truck, and mob hench-man can easily be concealing a sap.

Rather then feel limited by static images, use them to create exciting quirks for characters and monsters. Why is that thug missing an eye? What’s the deal with the wizard’s arcane staff? What do those robots in the techie’s backpack do?

While we have grouped the counters into vaguely related themes, most are generic images that can be used to represent a variety of creatures or characters, and should be easy to mix-and-match for any role-playing scenario. Commoners and thugs can easily become disheveled merchants or innocent on-lookers. An image meant for a PC could be a villainous personality, or a captain of the guard. Animal-human hybrids can be…well, they’re pretty limited in scope, actually, but you never know when you’ll need a Rat-man! Just because we’ve grouped them in certain themes doesn’t mean that you can’t take what you need and make it your own.

Let the Counters be the Encounter
Last, but certainly not least, if you’re stuck for adventure ideas, let the counters be the encounter. Slowly scrolling through a series of digital counter images, or simply looking at a sheet of published counters may inspire a number of ideas. If you take a hard look at the counters you’ll see that Claudio has taken great pains to detail each illustration in such a way as to suggest a story, a history, or a moment in time. The easiest way to begin is to start with the antagonists, selecting a master villain, and working through to who his or hers henchmen may be. What their goals and motivations are could be suggested by their images, or devising a plot opposite of what your initial impression might be. Instead of a dragon’s obvious pursuit of wealth, he may be looking for someone in particular for information. Who might that person be? There are hundreds of images to choose from. 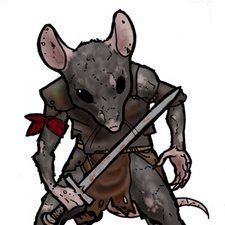 Another technique is to combine counters that shouldn’t belong together and figuring out a way they could connect. Using the digital files, I’ve gone through the various organized themes and started selecting images that don’t necessarily fit, but at the same time evoked a plot point, or connection, that could lead to a story… 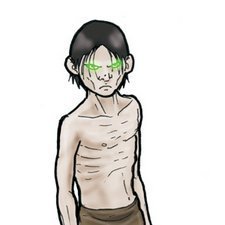 With what we’ve just talked about in mind, I thought it would be neat if my main villain was this “waterbaby-small” image; Reminds me of the “Village of the Damned” or the Twilight Zone episode of “It’s a Good Life”. Playing with the opposite vibe, what is more opposite to a traditional ol’ death knight, then a mutant boy with glowing eyes? At this point, I’m not concerned whether I have the stats for such a monster, because I’ll just find something that is the equivalent, or make up my own – but we’ll be going for a magic-using/controller type. Starting from small and ugly to big and ugly, I gave my villain a flesh golem; something to watch his master’s back and give a final encounter some brawling strength. Since there’s a lot of ugly, I went to the beautiful and chose a Dryad. The opposite connection to the dryad came to me as an older human, or in this case an aristocrat or landowner. To oppose him, I went with an ogre druid.

Now, this is the part where I stopped and did some thinking in order to connect the dots. What I came up with was that the dryad and the landowner had an affair, the product of that affair being the mutant boy. The mutant boy is terrorizing the landowner’s holdings, murdering the local populace – a possible hook for the adventurers. The boy is in the shadows, pulling the strings, while the flesh golem is the face of this terror, and the beast for which witnesses have described. Meanwhile, the dryad, horrified at what has become of her offspring counsels with an alley of hers, the ogre druid. The ogre druid was not aware of the affair initially, secretly jealous of this news because of his own feelings, and now wishes to see the landowner dead. He advises the dryad to tell the father in order to draw the aristocrat out into the open… 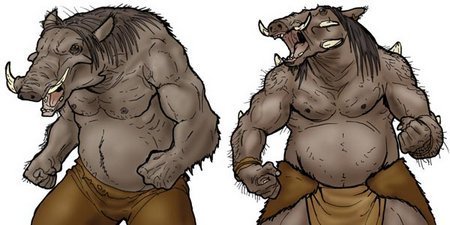 This is a good start to a background plot in which to situate encounters around. However, the next step is where a GM’s imagination really has to flex his or hers muscles. The villain has a henchman, but he needs “goons”, so I went with a selection of were-boars. He needs a hideout, so I went with a swampy ravine in a forest located on the landowners holdings; specifically, in some old temple-like ruins. The were-boars revere the mutant boy as a god in their clouded judgment, and were lairing at the ruins before the boy arrived on the scene. The landowner needs his own hench-man and goons, so I selected a ranger and rogue, with the typical men-at-arms that an aristocrat would employ. 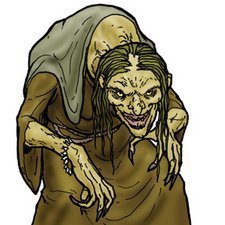 Lastly, I needed an explanation as to why a construct like a flesh golem (other then the Frankenstein vibe) would befriend the mutant boy. Well, that solution came when I saw the hag counter. She could be the one who made the golem, and is somehow behind the taint of the boy – she could even be the secret mother of the aristocrat! It is really her that is the villain, swearing revenge against her son, the landowner, for some hidden betrayal in light of his success. Meaning, the aristocrat is not entirely human, and why he took the dryad as a lover, etc, etc, etc.

Using the counters helped with the most important (and most difficult some would say) aspect of any good adventure and that is the characters. The counters facilitated the selection of interesting characters, and thus, get the imaginative juices flowing in order to create interesting adventures.

As I’ve said, the story we’ve created is the backdrop for which the adventure itself can now be constructed. The hook may be as simple as the villagers are terrorized by the man beast in the forest, and the murders he is apparently responsible for. OR, and more to my tastes, the characters are staying at the landowner’s manor when a murder occurs. They may question the landowner, but he nervously downplays the atrocity; not wanting to cause a panic amongst his people, or trying to cover up the fact that he is inadvertently responsible. The latter is more an Edgar Allan Poe thing. As the characters begin to investigate, they see the dryad leaving the manor crying, her latest meeting with the landowner not going so well. The “MacGuffin” now in full effect, the characters can simply choose to track through the forest, or question villagers to force an encounter at the ruins with the were-boars. Before they do, they have a run in with the landowner’s mercenaries, and a possible rivalry begins. Secretly, the landowner wishes the boy and all his works destroyed, including the dryad. As the characters trek through the woods following a lead, they encounter the mercenaries from a far, circling the dryad’s lair in attempt to assassinate her. The ogre druid steps in…do the characters get involved? Which side do they choose? Do they attack all of them? From here it should be elementary for the GM, mayhem for the PCs.

And there you have it! Adventure creation with counters!

Look for the 3rd installment in this series – Counter Workshop

Posted in Todd Man Out