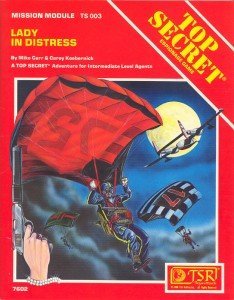 In case you weren’t aware, The Crew’s very own James has a website called Nerd Tangent. Lately, aside from the regular posts about all things Nerd, James has us guest hosting on what we would like to think as the greatest recordings since the Peel Sessions. That is, we’re helping to contribute to James’ very own Podcast, aptly named the Nerd Tangent, which you can try out here (which presently consists of us talking to our buddy Monte Cook).

A podcast that was recently recorded with James, John, and I got me thinking about a particular Christmas memory that is about as nerd gaming as you can get…and culminated into this gaming review…

A good adventure is like a good song – in time, memories are attached to them. Lady in Distress is my Christmas adventure. As you can probably guess, when I was 12 I got it for Christmas, but there’s other reasons too. First of all, the cover is red, so there’s that. And it was a Top Secret adventure and there weren’t too many of those published either, at least at the time. More importantly, the adventure came with a number of innovations that were new to TSR’s adventure modules in general. Like, it took place on a cruise liner. A very interesting environment when you consider that the two previous Top Secret adventures were essentially modern day dungeon adventures – TSR not straying too far from the D&D formula…remember this introductory adventure…? 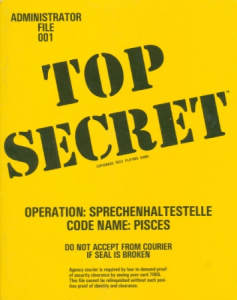 Operation: Sprechenhaltestelle or as it should be called: “How to hide a body…like, a lot.”

The real spoiler alert is that the entire beginning of the adventure is false. The agents are lead to prepare for a mission that involves them penetrating a villa compound by paraglide. A full mission dossier is provided as players equip their agents for an assault in the foothills of Spain. As their plane reaches their intended target, they suddenly receive an intervening mission directive. The cruise liner “M/S Corona” has been overrun by terrorists out in the Mediterranean Sea.  Speed is of the essence for an effective response. The agents need to immediately reroute, paraglide onto the liner, and take out the terrorists before they can organize. I guess the devilish part about all this is that you have a number of agents equipped for a land based mission, not one out to sea. The player’s ability to improvise is the real shtick of the adventure.

To further compound the agent’s difficulties it appears that the terrorists’ real target is a Dr. Salcedo; a passenger who they are aware has samples of a biological weapon that he has decided to irresponsibly transport on the ship.  With the cruise liner being rerouted by the terrorists, if the agents don’t neutralize the situation in the allotted time it’s a good bet that the city of Monte Carlo won’t be shaking dice cups for much longer.  Luckily, for the players practically all the passengers have already been set adrift in the life boats – presumably to make the terrorist’s focus easier, however it wouldn’t truly be a terror scenario if they didn’t keep some of the crew and passengers hostage.

Like the majority of published modules of the time it cut its teeth as a tournament adventure at Gen Con. It makes no bones about it, dedicating space on how to run and score it as a tournament. I always enjoyed the inclusion of the tournament scoring, especially for Top Secret. For me, I liked to run Top Secret as one shot episodes and the Tournament scoring was a nice way of judging performance after the dust cleared.

Art chores were carried out by Larry Elmore and Jeff Easley, with I believe Jim Halloway as the cover artist (the module is devoid of credits for some reason). Odd to see these classic D&D artists doing subject matter that is not fantasy but it’s some great stuff regardless.

Eerily, being published in 1982, Lady in Distress would go on to demonstrate how real its danger was because a few years later the unfortunate incident with the Achilli Larol would happen.  I remember when the news hit what a scary coincidence it was and yet it did demonstrate just how close RPG gaming could come to imitating real life.

In spite of this though, the authors of Lady in Distress give no specific motivation as to why the terrorists are doing what they’re doing – just that their leader has been scorned by a hidden injustice. Nor do they reflect on what will exactly happen if the players fail. A wise move on their part being that such information was likely left open for the Game Master to develop. It’s this lack of specificity that could have held back the impact of the adventure, but intuitively they still managed to give the terrorists motivations and idiosyncrasies beyond what could have been the obvious. Whether it’s a doctor being held at gunpoint to stabilize a gravely injured comrade or a killer that specializes in throwing knives, there’s just enough flavour to add to the tension.  To its credit, it does give instructions on how the terrorists will react once the player commandos have been discovered and an alarm is raised.  For the GM, in order to keep the adventure from being static, there is a lot to consider on the fly.

This is not a bad thing. It just means that not only is it a challenging adventure for the players, but for the Game Master as well. Its ambiguity insists that the Game Master invest time in putting their own personal touches into the scenario, making it that much more rewarding to run. That, and taking pleasure in the players reaction when they get the call for the emergency re-route.  In actuality, there’s even more to look forward too.  One must be able to see in the pre-reading of the adventure that there are a number of possibilities for real adventure gaming – hostage situations that will likely require negotiating, the agents attempting “Metal Gear Solid” style stealth for as long as possible, and the ever present ticking of the clock all help to give the table top experience a fair amount of texture and fun.

Lady in Distress exemplifies what a modular, pre-set adventure should be:  An interesting and unique scenario that is generic enough to take on the personality of the GM and/or the campaign it will be set in. Lady in Distress was just one in a small list of published adventures for Top Secret that were all excellent in their own right – some of which we may feature later!